Arkansans will not be pleased to learn that large European hornets, Vespa crabro, have recently found a home and breeding grounds in the Ozarks of Northwest Arkansas. These are powerful and agile wasps, the largest of the group that we know as hornets and yellowjackets. Females can measure up to nearly 1½ inches long. Although they normally fly during daytime, in humid windless weather workers may fly at night and are attracted to windows of lighted homes, where they may beat themselves against the glass with impressive and frightening force. Although they are said to be quite mild mannered and not prone to attack, they will defend their colony when their nest is threatened. The sting is said to be very painful and may cause allergic reactions in sensitive individuals. One study has shown that allergic individuals are at three times greater risk of having a dangerous allergic reaction from a European hornet sting than from a honey bee or yellowjacket sting.

The European hornet is easily distinguished from our common yellowjackets. It has a large, robust body with a characteristic black and orange striped abdomen. The head, parts of the thorax, and front of the abdomen are patterned in reddish brown coloration. The head is swollen behind the eyes, and ocelli (the small, simple eyes on top of the head) are remote from the rear margin of the head.

Workers usually hunt active insects, which they masticate and feed to the larvae in the cells of the nest combs. They have been known to raid bee hives, taking the bees and their larvae and pupaeas food, but leaving the honey. Workers in search of construction material and sugary liquids have been known to girdle twigs and branches of various trees and shrubs, including lilac, birch, dogwood, rhododendron, and boxwood. The wasps sometimes kill the plants. They also may damage ripe fruits, including apples and peaches.

The European hornet prefers the forest to suburban and urban environments. Because its rate of contact with man is usually quite low in most areas of North America, the chances of being stung are minimal. However, here in northern Arkansas, there are many homes surrounded by forest. 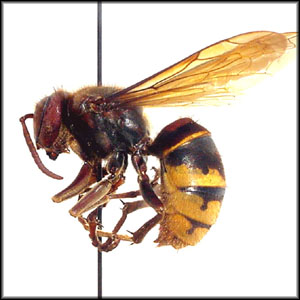 The hornets construct paper nests, usually in very sheltered sites above ground. They frequently nest in hollow trees, but they also use attics, porches, sheds, hollow walls of houses, abandoned bee hives, and, rarely, underground cavities. Nests in homes and other man-made structures may present a problem because of the stench they emit. Exposed nests have a complete, thick, brown paper envelope composed of course wood fibers. This envelope is absent from nests in sheltered sites. A typical nest of a mature colony contains 6 – 9 combs with a total of 1500 to 3000 individual cells. A typical colony might consist of 300-500 workers. A large, mature colony consists of about 1000 workers.

Colonies have an annual cycle. Males and queens are produced in late summer. Workers are active until about mid October, then the colonies die out. Only mated and fertilized queens winter in a state of diapause. These queens reappear in spring, and instead of reusing the old nests, they construct new, small combs, and lay eggs in each of the cells. The workers that result from these eggs enlarge the nest and care for the young through the rest of the season until more males and queens are produced.

As its common name implies, the European hornet is native to central and western Europe, but it is never found north of the 63rd parallel. In North America, it was first found in New York State in the mid 1800s. During the following century, it spread slowly through southern New England and south through New Jersey and Pennsylvania to Virginia and North Carolina. By 1973, outlying populations were detected in scattered localities in Georgia, Tennessee, Kentucky, Ohio, and Indiana. It was found in Shelby County, Tennessee, just over the border from Crittenden County, Arkansas. In the late 1970’s and early 1980s it spread rapidly across Kentucky. By the early 1980s, isolated reports revealed that it covered the area from Maine and southeastern Canada south to North Carolina and west to Michigan and Tennessee, with only scattered occurrences in states south of Tennessee and North Carolina, and for Wisconsin, Illinois, Minnesota, and adjacent areas north of Missouri and west of the Mississippi River. By the late 1980s it was spreading through the Ozarks of southeastern Missouri. 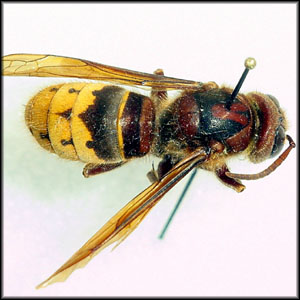 The European hornet was first detected in Arkansas in September 1999. A single specimen in the University of Arkansas Arthropod Museum was collected from a nest in Harrison, Boone County. Another specimen was collected in Fayetteville, Washington County in November 2001. Several specimens from Springdale, Washington County, were brought to the University of Arkansas Arthropod Museum for identification in August 2002. In late May 2004, the Museum’s curator collected a queen in an apple and peach orchard in northern Carroll County, near Berryville. Later, in August, a specimen, with reports of many more of the same, came in from the West Fork area of Washington County. In September 2004, Sharp County Extension Agent J. Joe Moore reported hornets nesting in a large hollow post oak tree in his front yard in Ash Flat. He also reported that some local grave diggers were run out of their truck by hornets attracted to the inside of the cab at night. At about the same time, an unconfirmed report of European hornets came in from Poinsett County. After a news release made the rounds of the state’s papers in early October 2004, more unconfirmed reports came in from Cleburne, Faulkner and Pulaski Counties, and the driver of a log truck wrote:

“I have recently had an encounter with the European hornet and I’d like to notify you of the encounter and location. I drive a log truck and one morning while I was getting my truck ready for loading I was stung. It was a little before daylight, I had my work lights on and bugs were flying around and as I entered my truck one got up my pant leg. attempting to shake it out I must have put pressure on it because it stung me on the side of the knee cap. I quickly came out of my pants to release this varmint and discovered my knee was turning red, swelling and burning like no sting I have ever received. The sting burned and irritated me all day but the pain relieved and the redness and swelling went away by late evening. It lasted roughly around 10-12 hours. I was aware of some trees around the loading landing that contained some sort of bee so I quickly decided it was one of them. I medicated the sting with items in my first aid kit and applied cool water to the area, which helped some. When the forest ranger over the area came around later in the day after I had left, the foreman of the logging crew notified him of my sting. He was aware of what the bee was so he collected one out of one of the hives and took it with him. He found it to be what the Forestry Commission called an European wasp. I know of 4 trees that contain these hives and they are located in the Ozark National Forrest in the Mt. View, AR. area. The location is 12 miles north on Hwy. 341 off Hwy. 14 out of Big Flat, AR… We have since observed this hornet attacking red wasp and yellow jackets. Other than my sting which occurred when I put pressure on it they have been only annoying flying around and we have been real close to the hives. One hive tree has been bumped with some of the equipment at times and all they have done was swarm around it and have not attacked us at any time.”

European hornets are easily controlled by applying aerosol wasp and hornet spray directly into the nest at dusk. The applicator should stand back as far as possible, staying away from light sources that might attract escaping wasps, and propel the spray 10 -15 feet into the nest. Nests in homes and other structures should be removed. The dead insects and nest debris can attract other pests, such as dermestid beetles.