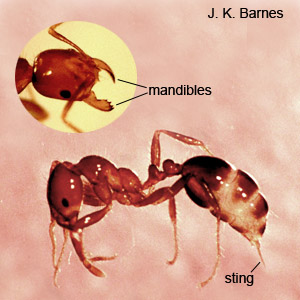 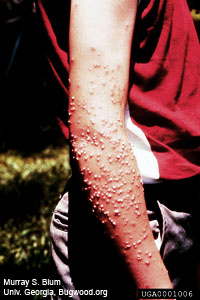 The term fire ant refers to any of several red or yellow ants of the genus Solenopsis that can inflict a harsh sting. Six species of Solenopsis have been reported from Arkansas. The most widespread and economically important one is Solenopsis invicta Buren, the red imported fire ant. It was probably accidentally introduced by ship from South America at the Port of Mobile, Alabama, in the first half of the Twentieth Century. It reached southern Arkansas in 1950, probably through movement of untreated nursery stock. By 1973 it had spread to nine southern counties, with the worst infestations in Ashley, Union, and Bradley County. By 2009, 33 counties in the southern half of the state were under federal fire ant quarantine, and isolated populations were known for 18 northern counties. Worker ants are small, 2–6 mm long (about 3/32–1/4 inch), but a single colony can house as many as 300,000 individuals. The colony lives in soil, and the mounds above nests can be up to 1.0-1.5 feet high. The mounds lack any obvious entry or exit. The ants use their stingers to subdue prey, which is usually invertebrates, but they will not hesitate to sting unwanted intruders, including humans. Workers will eat almost anything organic, including flesh, sap, seeds, and human food. Colony mounds can interfere with agricultural machinery. Workers steel seeds from seedbeds, feed on germinating corn seeds, gnaw holes in fabrics, injure or kill young animals, chew roots, stems, buds, and fruits of various crops, and girdle young plants. The dangerous ants boil out in large, menacing numbers to attack any animal that disturbs their nest. Worker ants are aggressive and can inflict painful stings while holding their ground on the surface of the victim with tightly clasped mandibles. In humans, small, painful skin pustules develop from fire ant stings. They can persist for several days and become infected if broken. Fire ant bites are occasionally fatal for hypersensitive individuals. The red imported fire ant is a major enemy of our native ant species, in some instances completely displacing certain ones.